Back in Jan I finally ordered a ROCKPro64. My goal with this system is to create a small quiet linux system that I can use to host a Bitcoin full node. I over provisioned it a bit so I can use it to self host other (TBD) services in the future. The core hardware I purchased directly from Pine64, the parts list is:

Unfortunately half the parts I ordered from Pine64 were mistakenly omitted from my first shipment. Then due to the Lunar New Year and the COVID-19 epidemic in China the remaining parts were delayed until just last week. I have to commend the Pine64 support team for doing their best in a difficult situation.

For hardware assembly instructions I used the RockPro64 wiki page and in particular the NAS Case page. I found the youtube video "PINE64 ROCKPro64 NAS Case Getting Started" from ameriDroid very helpful.

For the OS install I first installed Etcher on my laptop, and then downloaded the Armbian Buster image and loaded it onto my eMMC module using my eMMC USB adapter. This process was very easy, just select the image, select the empty eMMC removable drive, and go. Once written I removed the eMMC from the USB adapter and plugged it into the ROCK64Pro board. Attaching the module to the board is a little tricky because it is a very small connector. If I were to do this again I'd install the eMMC and the WiFi boards on the main ROCKPro64 board before putting the main board it into the NAS case.

Next I connected my ROCKPro64 to an ethernet switch and plugged in its power supply. I also attached a HDMI monitor and USB keyboard. To my surprise the system came right up, first try. On start-up I was prompted to set the root password and setup my first user account. Next I used the command ip a to get the systems DHCP assigned IP address and from then on was able to access it via SSH. I also setup my ~/.ssh/authorized_keys so I can ssh to it without a password.

When I tried to configure the WiFi interface I got disconnected and had to hard reboot the system. I need to do more research to figure out if there's a way to get the WiFi module to work with Linux. I read somewhere that it's currently only supported for Android. 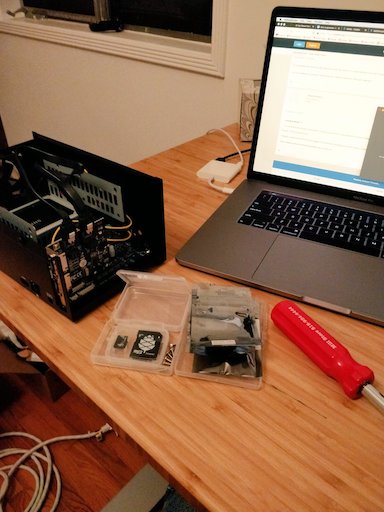